How to Deal With Rainy Wedding Days

It’s one of the worst fears a couple has on their wedding day: Rain.

Trust me when I say it doesn’t bode well for videographers either.

I don’t know about you, but standing out in the rain for long periods of time with an expensive piece of electrical equipment that makes up my livelihood isn’t exactly a perfect day.

In this article I will discuss my experience in dealing with rainy day weddings, and some tips on how to get good video out of the situation.

My Perfect Record With Rain

I can’t say that it has never rained on a day where I filmed a wedding.

What I can say is that it has never rained during an outside ceremony that I have filmed.

I like to call that a perfect streak, and by the end of my wedding videography career almost considered myself a good luck charm when it came to bad weather and outdoor weddings.

I would even brag to brides on the phone that I had never been rained out yet. Probably wasn’t the best idea to tempt the fates, but I came through with my record in tact.

The closest calls that I had were on 2 different occasions.

On the first occasion, which also happened to be my low-light wedding that I wrote about, it sprinkled all day up until the moment the bride stepped outside to walk down the aisle. They had their short ceremony, and the rain held off the rest of the day, although it remained cloudy and dreary.

In the second instance it was a torrential downpour the entire day. I had to do all of my pre-ceremony filming in the rain, which wasn’t a fun time, but I got it done. It was time for the ceremony in the woods and the couple was bound and determined to get married outside, so the show went on.

It was within 3 minutes before the ceremony started that the clouds broke and the sun shown through the clouds in spectacular fashion. The couple had a beautiful, sunny ceremony and the rest of the day stayed warm and sunny, although very muddy.

While I’ve had really good luck with rain, others of you won’t be so fortunate. The following are some tips to help you brave the weather.

Tips for Filming a Rainy Wedding

The most important advice is to stay positive. Panicking the bride makes you look bad, as mentioned above. Always watch the weather, but never tell the bride a storm is rolling in.

Simply prepare, be professional and positive,  and get the best shots you can.

Tell the bride that the most important thing is that they are getting married to someone they love, and weather be damned! 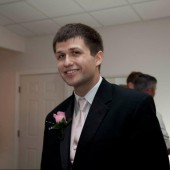 “You Never Know How Much You Miss As A Bride”

Why You Need Interviews At Your Wedding